Icons Of India: The Taj, Tigers & Beyond With Dubai & Varanasi 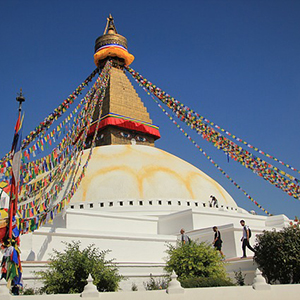 How do you express your eternal devotion to the love of your life? Mughal Emperor Shah Jahan enlisted the help of more than 20,000 workers and 1,000 elephants to erect a towering white marble mausoleum in honor of his wife who died during childbirth. A sunrise visit to the magnificent Taj Mahal, one of the New7Wonders of the World, is just the beginning of your love affair with India. Beyond India’s most sparkling jewel lies a priceless gem mine of experiences you’ll treasure for a lifetime. Hop in a rickshaw for a ride through Delhi’s centuries-old Chandni Chowk bazaar, sit down for traditional Indian cuisine in the home of a noble family in Jaipur, and embark on three thrilling open-air safari game drives through Ranthambore National Park in search of marsh crocodiles, striped hyenas, and the elusive Bengal tiger. A mosaic of memories awaits on this radiant tour of India. Start your travels in Dubai, where among the world’s tallest buildings await the world’s loftiest experiences. Add a Globus vacation to glitzy Dubai to your tour of India to experience the city’s Old World markets and world-class shopping, sweeping sand dunes and dazzling beaches, and traditional Bedouin villages and futuristic vibe. Cap off experience in Asia and immerse yourself in the holiest of Hindu pilgrim cities when you add a Globus vacation to Varanasi to your tour of India. A sunrise boat ride on the sacred Ganges River to watch the striking ritual of devotional bathing along the river’s edge is one of many unforgettable experiences found in this city.

Agra in the state of Uttar Pradesh was once ancient capital of the great Mughal Empire and is home of the Taj Mahal, considered one of the most beautiful buildings in the world. This matches the architectural gem was built as a mausoleum by the Emperor Shah Jahan for his beloved queen, Empress Mumtaz Mahal who died giving birth to his 14th child. The “Dream in Marble” is remarkable for its perfect balance and proportions. It was completed in 1648 and marks the most developed state of Mughal architecture.

The juxtaposition of ancient and modern worlds is perhaps nowhere more evident than in Delhi, a city of eight million. In the old part of town, visit the dome-topped mausoleum of Emperor Humayun and the imposing Red Fort built for emperors. Though the solid gold ceiling and precious gems of its Peacock Throne were looted by Persians in the 18th century, the immense palace resonates with the glory and wealth of the Mughal Dynasty.

Dubai is the Arabian Peninsula’s most cosmopolitan city-and the second largest of the seven United Arab Emirates. Unlike other Gulf statess, Dubai’s thriving economy is fueled not by oil, but by trade, which may explain its laissez-faire attitude. And if you like to shop this is THE PLACE, especially if you’re in search of electronics, gold, antiques and carpets. The souks in Dubai and nearby Sharjah vary from tiny stalls to covered malls. Don’t forget to haggle-it’s expected. More pastimes in Dubai are a dhow excursion on the tidal creek which winds through the city, a game of golf on the only real grass links in the Emirates, a tour of Sharjah, an evening safari inot the desert for a barbeque and traditional dancing and a thrilling demonstration of theancient Arabic art of falconing.

Prices are per person, land or cruise only, based on double occupancy. Offer subject to availability and change without notice. Some restrictions may apply. Please ask us for details.

Charges not included in the land vacation price: airfare to and from the start of your vacation; airline baggage fees including checked and/or excess baggage fees; Federal inspection fees for the Federal U.S. Customs and Immigrations; agricultural tax; other per person taxes imposed by government entities; applicable cruise taxes, fees, fares and port charges; passports; visas and vaccinations; transfers; tips to your Tour or Cruise Director, Local Host, driver, Local Guides, and/or ships’ crew; gratuities on ferries, trains, and cruise ships; laundry; telephone; minibar; alcohol, beverages, and food outside of the contracted menu as presented at a hotel or restaurant (these extra items will be billed to you before leaving the hotel, ship, or restaurant); additional excursions and activities not listed as ‘included’ in the itinerary; porterage at airports or train stations; Travel Protection premiums; and all other items of a personal nature.

Click on the buttons below to request a quote on this deal or contact us directly with further questions or comments.

Request A Quote Send To A Friend Have A Question? Contact Us

Send To A Friend